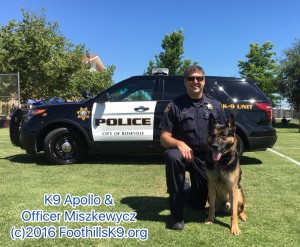 Officer Miszkewycz and Apollo. Apollo is a 5 year old German Shepherd imported from Germany. They are assigned as the designated SWAT K9 team and  train with Roseville SWAT. Officer Miskewycz has been with the Roseville Police Department since 2005, after spending five years with the Scotts Valley Police Department.

Iggy was born on May 17th 2009. He is trained in Handler protection,  building and area searches, tracking and narcotics detection. Iggy is considered a miracle dog because just weeks after being partnered with Matt he contracted a virus and nearly died. Another testament to the bond he had formed with Matt and his family , he recovered completely.